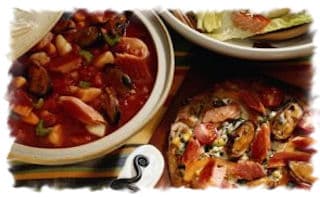 The most typical Costa Rican Menu is called a «Casado» (Married Man»), and it is always a platter with rice, beans, cabbage or other salad, meat or fish, sweet plantains, and picadillo. Picadillos are alway small squares of vegetables or potatoes with ground beef and sausage (chorizo), fried together and then cooked covered until the vegetables are tender. Picadillo means «Chopped».

Following are some Costa Rican Recipes you may like to try at home:

1 cup of rice, 2 Tbls. oil, one small onion, chopped, 1 potato chopped in small squares, 2 cups of water.
Fry all the ingredients until the rice is slightly brown . Add the water and bring to a boil. When the rice is dry, cover the pot and let it sit for 10 minutes.

For breakfast the favorite food is leftover rice and beans from the day(s) before prepared in the following way and is called «Gallo Pinto» (Painted Rooster):

Fry 1 chopped onion in oil, add the beans left over from the nite before until dry. Add then the rice and fold thoroughly. It is served accompanied by eggs and 1/2 a cup of creme fraiche with white bread or a maiz tortilla.

Fry the onion and culantro until onion is christalized. Add rest of ingredients and liquify. It is hearty soup and it isusually served with a hard boiled egg in it and croutons.

6 cooked pejibayes (If they are canned, peel them as early as possible so they are dry); 500 gr. Cream Cheese, (Philadelphia type); 1 tablespoon natural gelatine; Salt and Pepper to taste.

1- Put the cream cheese and add the peeled Pejivayes, without the seed, in the food processor to make a paste. 2- Add salt and pepper. 3- Add the gelatine, which has been previously dissolved in 1/4 cup of cold water and heated for 1 minute in the microwave oven. 4- Put in mold in the refrigerator until it is solid and it turn over. 5- It is served on melba toast or crackers. It may also be served in slices on a thick Butter Sauce as a starter garnished with salad greens.

Boil the Chayotes with the skin until done, about 20 minutes. When done, peel and slice. On a platter over a bed of purple salad leaves already mixed with the vinagrette, put the slices of cold Chayote, each with a spoon of Cottage Cheese and add the fresh ground pepper. Serve cold.

Drain throughly and then add the tuna, the lemmon juice, salt and pepper. Serve cold.

The fish or the meat is finely shredded. Add all the other ingredients which have been previously mixed. Let it cool for at least two hours in the refrigerator. It is served on salad leaves and garnished with capers, olives or pimentos strips.

You mix all the ingredients, except the olive oil. The fish should be covered by the lemon use in a glass container with a cover in the refrigetor for at least 24 hours. Before serving add the olive oil. Usually served as a starter on lettuce leaves in low cocktail cup. Can be served as canape on crackers or melba toast.

Chop the hearts of palm in squares of about 1/2 cm x 1/2 and fold them into the rest of the ingredients previously mixed. It is seved on lettuce nests which already has vinagrette added to it. It also can be served as an hors d’oeuvres on melba toast or crackers.

Add the gelatine, which has been previously dissolve in 2/3 cups of cold water and heated for 1 1/2 minute in the microwave oven.

Mix all the ingredients and then add the gelatine. Put in mold in the refrigerator for at least 3 hours before serving. May be served as a salad or as an hors d’oeuvres on melba toast or crackers.

Chicken or quail drumsticks in Escabeche

Fry the drumsticks in 1/2 a cup of oil until golden brown. Remove from stove and peel the skins off. Put the drums in pyrex dish with a cover. Cover the drumsticks with the onion rings, the bay leaves, olives and capers. Mix in a cup the rest of the oil, the vinegar and the the water. Pour over the chicken drumsticks. Put in the oven covered for 1/2 an hour. It may be served hot or cold as starter or a main dish. It is best when served cold after being for serveral hours in the refrigerator.

1.- Cook and shred the deboned chicken breasts, add the tomatoes, olives, capers and raisins. Cook at moderate to low heat until thick. 2.- Liquify the corn with the egg yolks. Beat the egg whites until fluffy and fold into the corn. 3.- Reserve 1 cup of this mixture and add to it the cheddar cheese for the last layer. 4.- Put the mixture in point 2.- in the bottom of a pyrex dish. Add then the ayer in point 1.- Top with the mixture in point 3.-. 5.- Decorate making flowers with the sweet peppers; Bake moderatly until golden brown.

Rice with hearts of Palm

Fry the flower in the butter until slightly brown and remove from heat. Add the yolks to the wine and bring to a boil. Add the cream. Add the rest of the ingredients except the egg whites, the parsley and the cheese which you mix separatedly in another container.

Liquify the prunes, capers, olives, mustard, mermelade and oil into a paste. Let the tongue sit for 20 minutes with the paste. Over a pan with 4 cups of water on a rack put the tongue in the oven at moderate heat for 1/2 an hour, pouring water every 5 minutes over the tongue. Take out of the oven and slice the tongue.

On a pan with the bread crumbs pour the water from the oven with the bay leaves and let it boil and then simmer until you get a thick sauce. Pour over the tongue a serve.

Wash the plantains with the skin and cut off the points. Cut each of them in 3 equal parts. Boil them until the skins crack open. Drain the water, peel them, and let them dry out and cool. Shred them in a Jullienne.

Fry the onion and the sweet peppers. Add the rest of the ingredients except the cream. Fry a litlle more and add the plantain, stirring thoroughtly, Add the cream and stir. May served hot or at room temperature as an accompanying dish or as an Hors d’ouvres on crackers.

The sweet plantains should be sliced thin long ways to create about 1/4 inch strips. In about 4 -5 tablespoons of olive oil cook with medium low heat. Turning several times. Allow them to get golden brown but slowly. The longer the ripened plantains cook the sweeter they are.

The green plantains should be sliced thinly to create thin little oval chips. These should be cooked with medium high heat until they are golden, to achieve this you can dip them in milk. These should be fried and placed on top of a paper towel to drain. Then add salt.

Fry all the ingredients except the beans until the onion is christalized. Liquify this mixture with the beans and refry for 15 minutes until thick.

Black beans cooked this way are usually served at parties with tortilla chips. Also on party toasts with a little piece of cheese on top which is melted in the oven. Great with to accompany meats served with ripe plantains.

Wash the oranges, cut them in half and extract carefully the juice. Keep the skin halves and remove partitions.

Mix the juice, the sugar and the Maicena and bring to a boil stirring constantly. When it starts boiling remove from stove and add a teaspoon of butter. Refill the skin halves with the custard and refrigerate until it sets. Decorate with mint leaves or cherries.

Note: The same recipe may be done with pineapples.

6 very ripe plantains (they should be very black), peeled and cut in slices of about 3 cm thick; 1/2 cup of butter; 1 cup of sugar; 1 tablespoon natural vainilla; cinammon sticks.

Fry all the ingredients and add then a cup of water. Let them dry out to custard and then add again un cup of water. Repeat the process once or twice until the plantains are very soft. Serve hot with vainilla ice cream or room temperature alone.

Beat egg whites with salt until stiff, during 3 minutes so they are very fluffly, keep aside.

Beat the egg yolks, the vinegar and the vainilla separatedly during 3 minutes. Add the boiling water slowly, keep aside.

Siff the flower, baking powder and alternatingly fold, the egg whites, the dry ingredients and the mixture of the yolks. Pour in a greased and floured rectangular pyrex of 22 cm. Wide by 34 cm long and 4cm high and put in the oven for 25 minutes. Take it out, separate the sides, make holes with a wet knife and soak with cream of the milks.

Put the egg whites in the beater but do not whip yet. Aside in a medium pot mis the rest of the ingredients at a moderate heat until it boils for exactly one minute making bubbles. Remove from heat, pour over the eggas and inmedialty whip. Whip for exactly 5 minutes and decorate the suface.

Preparation After the corn has been separated, wash thoroughly. Then in an electric food processor, use the shredding blade / grounding blade preferable. Once you finish grinding, place contents into a large colander draped with the cheesecloth. Let stand over a large container to catch the drippings for a full 24 hours. The clear liquid is removed and reserved for a bit later. Let the remaining liquid settle; then cook with the cinnamon, white sugar and cloves. As you stir this mixture to a simmer begin to slowly add the remaining clear liquid. Continue to stir over medium heat, stirring constantly until desired thickness is achieved. Once it has reached a gelatin thickness. Let cool on cooling rack. Serve at room temperature or cold. Add anisette sponge cookies to each serving.

First, in a large cooking pot, add the water, 4 cups of milk, uncooked rice, cinnamon, evaporated milk, vanilla and nutmeg. Once on the stove, bring the liquid to a boil. Boil for about 5 minutes. Then, add the sweetened condensed milk. Add a little water to the milk can and empty its contents into the pot, by this time the liquid should be simmering, on low heat. The milk should just barely simmer, with bubbles breaking only the outside edge of the surface. As the liquid begins to reduce, add the remaining milk in small increments as you continue to stir. As you add the milk stir the mixture so that it cooks evenly. Continue to stir intermittently, until the liquid has become a gooy paste. Then add raisins and cook for an additional 10 minutes on. Total cooking time 1:15 minutes.